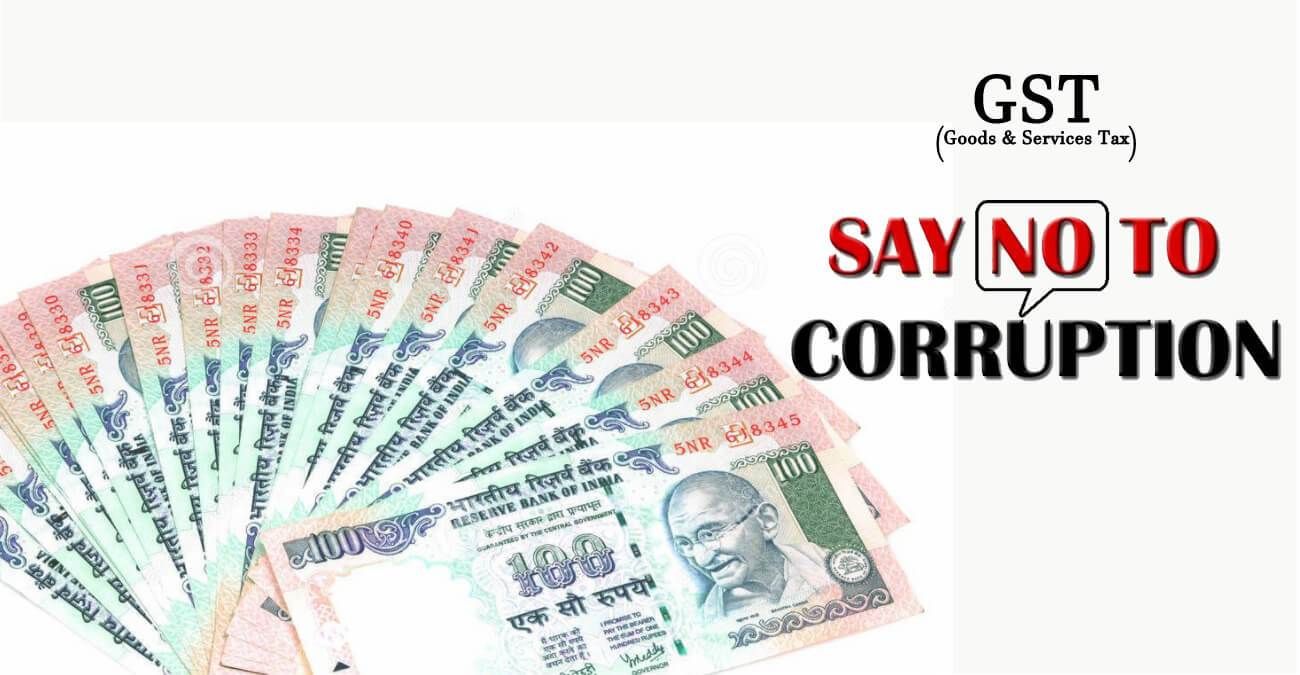 On the past many years, you have perhaps heard of the continuous arguments on the issue of corruption in the country. And the government is trying to think of various ways to manage it efficiently. The good news for Indian citizens is that after thorough discussions, the experts have considered Goods and Services Tax (GST) as the strongest measure to prevent corruption. GST will also broaden the taxation base of the nation, and increase the collection of taxes.

Why There is so much Corruption in India?

When infrastructure is bad, services are substandard, have so much competition everywhere then one who has money in his/her pocket, it is natural for him to pay out to get way for convenience. India has a long way to go to develop public infrastructures and basic facilities to all. People are used to of exploitation because of Low Pay scales/ Wages, less job opportunities, lack of strict and fast punishments, lack of unity in public; and therefore politicians who know the miserable condition of common citizens, who know their weaknesses, they utilize such situations as opportunity by doing all kind of nonsense for their petty individual gains, may it be subsidy politics, religion and caste based politics and all bad they can think off to help and we can let them do.

How GST can help in decreasing money laundering

As per the tax managers, Goods and Services Tax (GST) may be useful to control black money problem in India. Although this is mainly indirect tax reformation, many tax filers do not give the report for all transactions, they disclose less, however, earn more and hiding actual figures from books help them to pay low taxes. They want to keep away from the VAT, excise, and many other taxes. But, with GST, as the tax department will keep track of everything, taxpayers won’t get chance of conducting any illegal practices. The application of Aaadhar will also become more prominent as this is essential for filing GST. It’ll be easy for tax unit to record transactions.

Since implementing agencies would have the vast amount of online data and information, therefore, observation will be more precise and therefore action will be stringent, this will shift from origin- to destination-based taxation under the Goods and Services Tax (GST) would help in tracking very fast. A tax structure is usually recognized with variations that are specific to every state. It differs according to VAT percentage, the release of fresh levies, regular changes and many more. Though there are several possible factors, one major one is considerable unrestricted powers on government authority. Since GST has its root from the need of consistent tax rules, there won’t be much discretion. After applying GST, as there’ll also be the dual structure for observation, there may not be any chance of tax evading issues. While one tax authority is unable to identify the evasion, the other one will perhaps not overlook it.

Impact of GST for Various Sectors

Goods and Services Tax (GST) will certainly have implications for all sectors including real estate, it will affect both buyers as well as sellers. Property purchase is undoubtedly one of the biggest financial decisions of a person and GST may not be instrumental in lowering the hell touching prices of residences over the storm term, however, our perception related to this sector will certainly change on the positive node. The tax administrators have observed that in the realty sectors, there are maximum possibilities of unfair practices to avoid tax. The new tax system will develop the compliance among property developers, sellers, builders, dwellers, and investors. The compulsory trail created by GST may have an extensive impact. Regarding the sale of alcohol, there are still some controversies. One of the economic consultants has stated that by including reality, alcohol and expensive metals (like gold), there will be another way of restraining money laundering issue in the relevant departments. Though alcohol sector has some possibilities of staying away from GST, others ones are major sources, producing black money.

Technology has the Significant Role in GST

One of the major traits of GST is its dependency on the latest technology. Most of the filings for tax will be based on automated systems, and there will not be a significant need for any physical contact of authority with the taxpayer. At the same time, the e-filing procedure will make sure that there’ll be no risk of any backdated document, wrong details, and modification of any data in future. Since there will also be no possible path to stay away from legal rules, illegal practices will become controllable.

Moreover, as the taxpayers will register for GST using their PAN, it may also allow the authority in checking all the declarations occasionally. All the discrepancies will easily become detectable, and so, the chance for tricking with various central and state tax authorities will not be easy. The Indian government will get the comprehensive database, and it may be categorized in a range of ways, depending on industry, location, and pattern of consumption. The auditing tools will also become more efficient in order to trace out the possible corruption, tax evasion, and discrepancies.

A Better Level of Monitoring will be Possible after implementing GST

One of the tax officers has said that when any retailer or merchant has bought some commodities from the wholesaler and does not report this deal right not, he can’t do it in future, after applying GST. So, in order to validate his transaction, he needs to keep up a track of all his deals, by generating the right bills. After the initiation of GST rules, all the traders have to sell their goods with bills. As the bills will be present in their system, money laundering will be reduced naturally.

By making use of technological innovations, GST can reduce the complications of black money but meanwhile implementation of GST cannot be overemphasized and professed as the only solution to control corruption and bring transparency into the system, indeed to curb black money we still need many more actions in future.

Five Elderly Women In Britain Who Gave Birth to Baby!